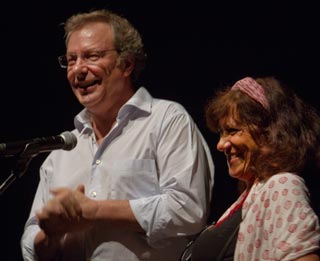 For the last 18 months, Luis and I have been working on this Bijagós project round the clock, trying to shape the wealth of material and stories around the Bijagós. Luis did the first filming trip on his own and returned with fascinating material. We then did a second research and development trip last March to film characters and their stories.

We returned with enough material to translate for three months! Then we began to realise the diversity of potential stories and how one documentary will not be enough to tell it all. We also had to produce one episode to be part of the Gulbenkian cultural season Next Future in September. Patricia and Luis started pulling scenes with different characters, but when we looked at the rough cut, the power of the different moments seem to cancel each other. The main character was Banca, an old sculptor of spirits transmitting his knowledge to his son Carlos, while making his last sculpture. We had footage of the whole process – from selecting the tree to transforming a piece of wood into a sculpture to be the recipient of a spirit. But also many other moments linked to rituals and dances when performers communicate with spirits.

Anyway, after 5 weeks of editing we had to rethink the core of the film – and ask ourselves what really the film is about.