"I don't know what truth is. Truth is something unattainable. We can't think we're creating truth with a camera. But what we can do, is reveal something to viewers that allows them to discover their own truth." – Werner Herzog 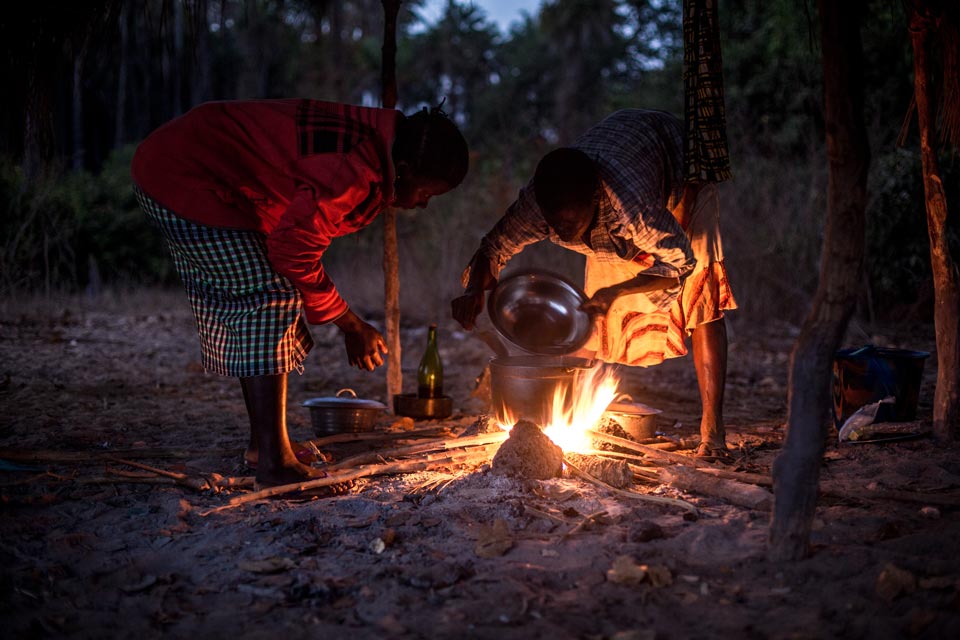 During our time with the Bijagós people we were immersed in a surreal world where people talk to trees and allow chickens to make daily decisions for them. Our preoccupation as directors was to go beyond the ordinary acts and film the appearance of things and people beyond the superficial. We wanted to create meaning behind the invisible and the significance underlying their words and action. The device we used to create breathing spaces in the narrative of the film was to turn our images into moving poetry. This way we could connect different ideas and create new meaning out of it, without having to rely on a didactic approach. The challenge of course was not to fall for the 'exotic' with so many lively and colourful moments.

We are hoping to create an accumulative effect in the audience by allowing their impressions to connect slowly so that viewers can feel part of the process of discovery.

Although we did a lot of interviews with our participants, we opted for not using them in the film. The intention was to plant questions and share preoccupations for them to bring it up amongst themselves whenever it was appropriate to them. But of course, only once we had all the conversations translated, could we really profit from those exchanges, and only then did we realise the full benefit and success of that strategy.

We have been filming in the Bijagós archipelago for several years and created a special friendship with our characters and got a unique access to their family and villages.

Due to their geographical isolation, the Bijagó people led a sustainable way of life, and retained their original traditions, where every activity is a communication with the sacred. But the most striking is the role of women who transgress into dead male warriors during several months of their initiation, giving them a unique spiritual power that will allow them to be respected and feared by men for the rest of their life.

Very quickly after spending time with the Bijagós we realized that we were witnessing a society in deep transformation. The foundation of the Bijagós society is for the young to provide for the elders in exchange of the secrets of life. But with the arrival of money, tourism and alternative religions, the young are now being lured into the 'modern world' and turning their back to tradition with disastrous consequences for both the community and the environment.

The needs and dreams of the youth are so different from the elders, creating a big rift between the two generations. Although the film is not an investigation into this theme, nevertheless the following questions were on our mind every time we had a conversation and therefore influencing some of the thoughts shared by our participants.

Now that the youth is starting to yearn for modernity, can the Bijagós withstand the maelstrom of development?

Who will become the keepers of their knowledge?

Will they discover a new fusion between tradition, nature and modernity?

Why should we care?

Besides its rich, intriguing yet meaningful culture, the Bijagós archipelago has been uniquely preserved thanks to the traditional matrilineal management of the islands and the preservation of natural resources, with unique biodiversity. We know that those rare spaces are now the lungs of our world.