The Archipelago of Sacred Plants

During the fourteenth century, the expanding Muslim Mali Empire pushed the Biafadas, Fulas & Mandinkas to invade the Bijago territory forcing the Bijagos to flee from mainland coast to the Archipelago, now named after them.

All historical records recount stories about the Bijagos as fierce pirates and slave traders. They had to transform themselves from peaceful people to aggressors in order to defend their new territory, the Bijagos islands.

Once the slave trade with Europeans stopped, and the Portuguese were given the Guinea-Bissau territory at the Berlin conference, they turned all their efforts to bring under control the Bijagos. It was difficult because the Bijagos had collected a lot of arms but above all had developed a strong, self sufficient, cohesive society. 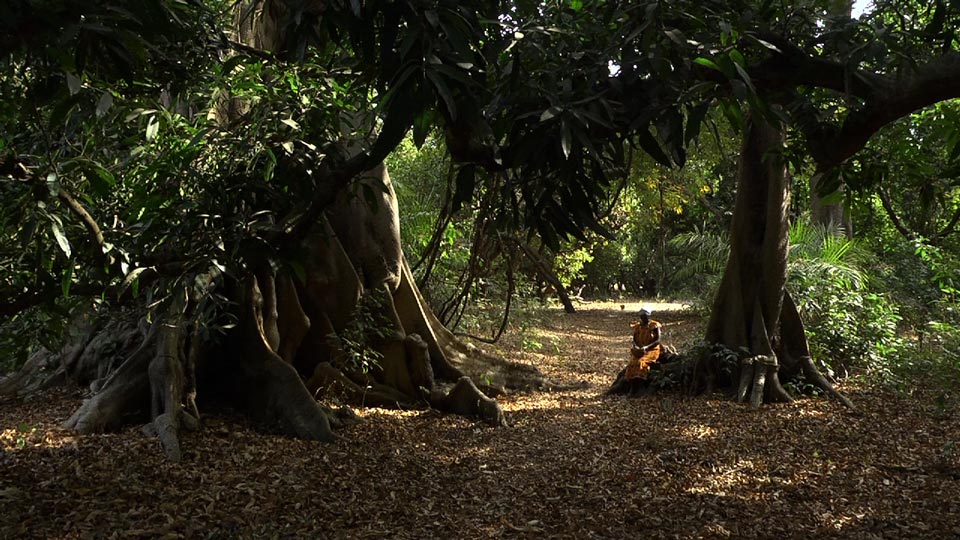 The secret kingdom of the Bijagos explores the transformation of one of the most mysterious tribes off the West coast of Africa.

Playing across past and present accounts, the film tells the turbulent story of the Bijagos packed with struggles, alliances and strategies to save their culture and identity.

Throughout, the film interweaves the voice of Okinka Pampa, ruling queen from 1910-1930, with the travel photos of Austrian ethnographer Hugo Bernatzik (1931) and texts by British travel writer Archibald Lyall (1938) but more importantly the current live stories told by the Bijagos that we have been following for several years.

The present looks like the past and yet everything is changing. The contemporary local-global interplay is fostering a new moment of rupture in time and space for the Bijagos.

The core of the Bijagos society is rooted on a gerontocracy structure where the young provide for the old.

The traditional way of life is to produce and eat what you need in harmony with nature. Rice, palm trees and the abundant sea provided for all their needs for many centuries. However, with the spread of schooling, tourism and mobile phones the elders are left working alone in the fields while the young drift away looking for new opportunities.

That shift of power is the result of the introduction of money but more important the construction of new needs in people, driving them to give up on traditional ways of living based on sustainable agriculture and to adopt cash crops despite damaging their environment and shifting the use of collective land to private hands. This seditious shift transforms the foundation of the Bijagos culture forever.  Soon all their colourful rituals and dances devoid of meaning will belong to touristic carnivals and museums.

The film goes beyond observing the degradation of the Bijagos society. Through the construction of images and sound it becomes a unique opportunity to understand how a society under globalization changes from a sustainable economy to dependency, prioritizing the individual over the collective.